Wells Fargo and other banks lease out railcars that carry coal, grain and other commodities; the business is becoming a weak spot

Banks including Wells Fargo, Citigroup C +1.43% Inc., PNC Financial Services Group PNC +0.18% Inc. and CIT Group Inc. CIT +0.24% own hundreds of thousands of railcars that carry coal, grain and other commodities through North America. It is an unusual line of business for lenders, which typically focus on more traditional loans and deposits. Now the niche has become a headache. Tepid railroad demand and changes in commodity markets have made it a rare weak spot in commercial lending.

Banks got rid of many of their esoteric business lines after the financial crisis but largely hung onto their railcars, leasing them out for a variety of commercial purposes. In return they get a steady stream of revenue, though that has taken a major hit.

“The industry is suffering, there’s no two ways about it,” said David Nahass, president of Railroad Financial Corp., which advises railroads and lessors. “Lease rates are down and there’s not a source of hope about when it will start to improve.”

CIT has estimated that lease rates will fall between 10% and 15% in 2019 from last year. GATX Corp., a nonbank lessor, said rates on certain cars fell about 20% in the third quarter from a year earlier.

Large railroads are trying to use fewer trains to save money, and nearly 400,000 railcars are in storage, according to the Association of American Railroads, or AAR.

The downturn has been particularly acute for certain types of railcars. Coal shipments have fallen since 2011, according to the AAR. Energy companies involved in hydraulic fracturing have started using a different type of sand, rendering thousands of sand railcars obsolete, said Patrick Mazzanti, a railcar appraiser and former banker. New regulations mean many oil cars must be retrofitted, said Mr. Mazzanti.

“It’s the worst market I’ve seen in my 30-plus years in the industry,” he said.

Rail-leasing units at big banks are typically a tiny part of a massive balance sheet and their performance isn’t broken out in public filings. Their relative size also means that even severe distress would be unlikely to cause a serious problem.

Wells Fargo inherited its rail unit from its crisis-era purchase of Wachovia. It was long called First Union Rail, a reminder of Wachovia’s predecessor, but Wells Fargo greatly expanded the business a few years ago.

In 2015, Wells Fargo was awash in cheap deposits it needed to put to work. General Electric Co. was selling off most of its financial business. Wells Fargo struck deals to buy billions in assets from the industrial conglomerate, including 77,000 railcars. It says it is the largest lessor in North America with more than 175,000 cars.

The business could sometimes be an awkward fit inside a highly regulated bank. Compliance staffers at the bank, for instance, closely scrutinized the railcars owned in Mexico, a person familiar with the matter said.

Overall, the unit hasn’t performed well, people familiar with the matter said, in part because a significant number of its cars are older or built to transport coal. The company unsuccessfully tried to sell the unit last year, they said.

While railroads are in charge of moving the cars from place to place, banks often cover the cost of maintenance. Wells Fargo even counts a chief railcar mechanic among its 260,000 employees.

Success depends on getting the mix of railcars owned just right. Jack Thomas, who ran Wells Fargo’s rail business until 2013, said he would often turn to economic data on new-home construction or auto sales to help manage the fleet.

“With mortgages you’re dealing with one aspect of the economy,” Mr. Thomas said. “With railcars, it’s every aspect.” 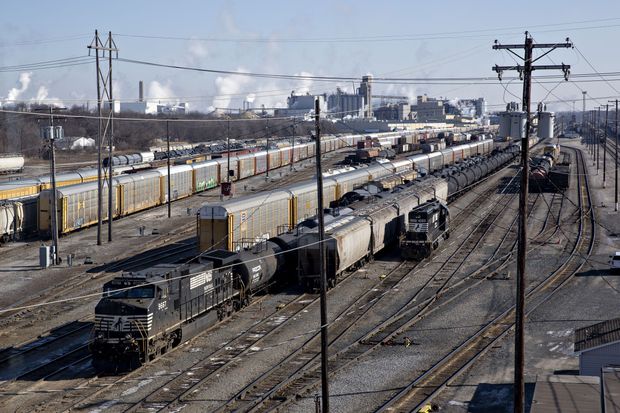 Large railroads are trying to use fewer trains to save money, and nearly 400,000 railcars are in storage. PHOTO: DANIEL ACKER FOR THE WALL STREET JOURNAL