The humble cargo van is having its moment.

Sales of vans used to transport packages and other internet-ordered items are booming, driven by a continued surge in online shopping and the popularity of free delivery services, auto executives and analysts say.

Auto makers are notching record van sales and adding features to the traditionally no-frills vehicles as they vie for a bigger share of a category that executives expect to outpace the broader auto market in coming years.

Helping fuel the growth is Amazon.com Inc. AMZN +2.53% ’s expanding package-delivery network. The e-commerce giant in 2018 started a service that outsources its delivery operation to small businesses, which in turn employ drivers who lease or rent vans. Gray Amazon vans have become a common sight in neighborhoods across the country during the busy holiday-shopping season.

The growth goes beyond Amazon’s network. U.S. sales of cargo vans used in fleet services rose 5% last year and are on pace to jump 19% this year, compared with flat sales in the broader vehicle market, according to research firm J.D. Power. Sales are expected to stay strong through mid-decade as ever-shorter delivery times drive demand for smaller, more-versatile vehicles, analysts and executives say.

That has translated to brisk business for van makers, including Daimler AG DMLRY +2.55% , which makes the Mercedes-Benz Sprinter van; Ford F +0.00% Motor Co. and its Transit van; and Fiat Chrysler Automobiles FCAU +2.31% NV’s Ram brand, which makes the ProMaster van.

Startups also are benefiting. Michigan-based Rivian Automotive in September landed an order from Amazon to purchase as many as 100,000 electric delivery vans over the next decade, with the first ones showing up on the road in 2021.

Cargo vans such as the Sprinter or Ford’s Transit are an ideal size to handle the shorter routes and compressed delivery times needed for same-day parcel service, as well as grocery and restaurant delivery, analysts say. The vans have roughly one-third the interior space of a typical box truck used by United Parcel Service Inc. or FedEx Corp.

Amazon drivers typically handle smaller packages and may reload their vans several times during the day, rather than staying out for an entire shift, said Cathy Roberson, chief analyst with market-research firm Logistics Trends & Insights LLC.

“These vans are much more conducive to same-day delivery and the narrower delivery areas” of Amazon drivers, said Ms. Roberson.

This year, American consumers will get 8.6 billion packages delivered domestically, according to projections from SJ Consulting Group. However, the growth in delivery services is increasing congestion in cities, particularly during the holidays, prompting many local governments to put in specialized pickup/drop-off zones and explore other ways to alleviate curbside traffic.

Delivery vans have emerged as a welcome growth niche in a U.S. auto market that is easing after years of strength. 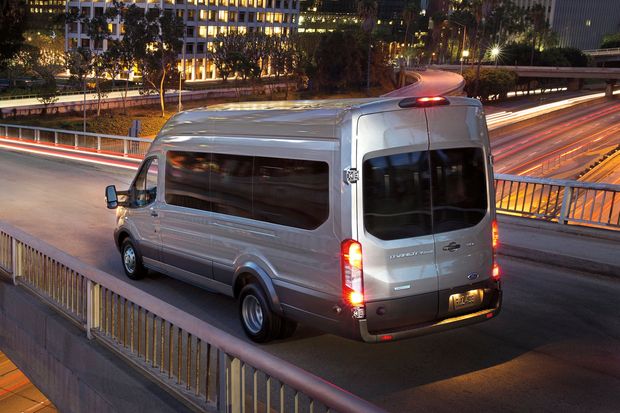 Vans are a staple of the commercial-vehicle market, a category largely defined by sales to business and government buyers and dominated by Ford, GM and Fiat Chrysler. Commercial sales typically account for 20-25% of overall volume at the Detroit companies and help lessen their exposure to the ups and downs of the retail business, which focuses on vehicles sold to consumers at dealerships.

Ford posted record third-quarter sales of 65,288 vans. The auto maker spent more than $1 billion to retool its factory in Kansas City, Mo., to produce the Transit van starting in 2014. Long a staple of commercial fleets in Europe, the Transit is lighter and more fuel efficient than the bulky E-Series vans it replaced, and is offered with varying roof heights and layouts to give buyers more choice.

Ford also has been adding features not typically found on commercial vans, including safety gear such as automatic emergency braking and creature comforts such as internet connectivity.

“There’s a lot of big upside as the need and use of our vans continues to grow with businesses that are growing in that space,” said Jim Baumbick, a Ford vice president in charge of global product strategy.

A Ford spokeswoman declined to say whether it has sold vans directly to Amazon, though some of Amazon’s delivery contractors use leased or rented Ford Transit vans.

Amazon has about 30,000 delivery vans in use by its network of 800 contracted delivery businesses, which now includes about 75,000 drivers, an Amazon spokeswoman said, declining to specify models. Last year, the company said it ordered 20,000 Sprinter vans from Daimler, which opened a new South Carolina factory that year to supply vans to the U.S. market.

FedEx since spring has purchased more than 2,700 cargo vans in response to rising e-commerce business, a spokeswoman said.

Ram ProMaster sales have grown each year since Fiat Chrysler introduced the model in 2015 as a more-nimble, easier-to-drive option to its previous trucklike vans. The company is straining to meet demand and has boosted output several times at its ProMaster factory in Saltillo, Mexico, a spokesman said.

Sales of General Motors Co. GM +1.14% ’s Chevrolet Express and GMC Savana vanswere up about 8% this year through mid-December. A GM spokeswoman attributed the increase to demand from large online retailers but declined to name them.