SHANGHAI/GUANGZHOU -- Inventories are piling up to all-time highs at Chinese steelmakers as the coronavirus epidemic hamstrings factories and construction sites while logistical difficulties stall shipments.

Prices of steel products in the country have fallen nearly 10% over the past month. If inventories continue to rise in China, which accounts for more than half of global steel production, surplus products may be exported at low prices, pulling steelmakers worldwide into the doldrums again.

"Even backup warehouses are filled up with steel products as our customers have yet to restore operations and the flow of goods has stagnated," said an official at Magang (Group) Holding, a leading Chinese steelmaker.

The China Iron and Steel Industry Association says inventories at member companies totaled a record 21.34 million tons as of Feb. 20, up 45% from a year earlier.

Inventory of steel products in China had surged to 17.45 million tons in June 2015, the highest before 2019, amid global concern about excess production by Chinese makers. But the current level exceeds that figure by more than 20%. 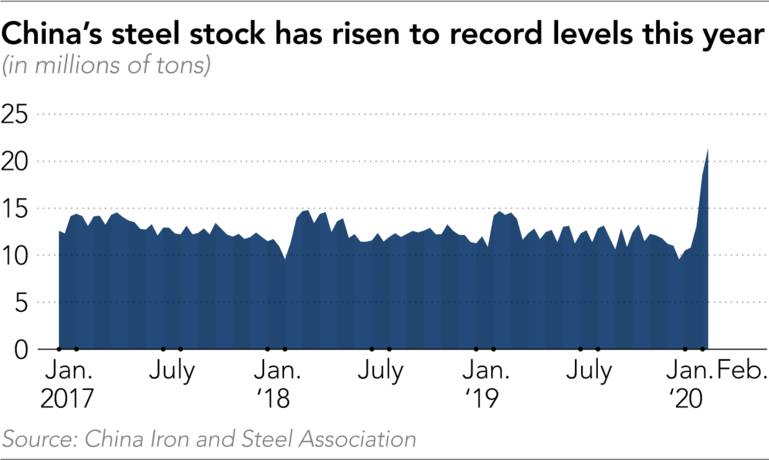 When the new coronavirus spread in China during late January, automobile and home appliance makers halted operations for the Lunar New Year holiday season. Meanwhile, many steelmakers continued production through this period, as usual, because blast furnaces are designed to run constantly.

Steelmakers usually ship these stockpiled products following the holiday season. But that has not happened this year, largely because construction companies -- which use half of steel output -- have yet to resume work at many building sites.

Subway construction in central Guangzhou remains halted. Tens of employees worked there before the Lunar New Year holiday season, with the sounds of excavators ringing out into the night.

"We haven't been informed of when the work will resume," a security official said. "Only one or two workers have returned to Guangzhou."

Seasonal workers who come to urban areas from rural villages are staying home due to transportation difficulties. The roughly 300 million migrant workers who went home for the holiday will not return in full for work until after March, China's Transport Ministry said.

Many public works projects have been delayed. Just 47% of major national road construction projects and 48% of river and other water transportation projects had resumed by the end of February, the ministry said.

Manufacturers, the other main destination of steel shipments, also have yet to restore operations. Auto plants have delayed resuming work due to the post-holiday shortage of employees and parts.

The auto industry remains far below full speed. Honda Motor, for example, postponed the restart of its plant in the Chinese city of Wuhan -- the original epicenter of the outbreak -- until at least March 11.

"We will cut back on production but cannot decide how much because many customers remain closed," said an official at Chinese steelmaker Hunan Valin Iron and Steel Group.

Zhang Jingang, vice general manager of China Baowu Steel Group, told reporters in late February that the logistical difficulties are extreme, even as the country's biggest steelmaker continues production across China including in Wuhan.

Chinese steelmakers faced difficulties even before the Lunar New Year as sales of cars and home appliances slumped due to the national economic slowdown amid the Sino-U.S. trade war. Demand for steel products also has suffered from a delay in the government's infrastructure investment.

Major Chinese steelmakers already were forecast to incur profit declines across the board for the business year ended in December, and the new coronavirus has dealt an additional blow.

Baowu expects profit to drop by 2 billion to 3 billion yuan ($287 million to $430 million) in the first quarter of 2020 due to the effects of the coronavirus, Zhang said.

Inexpensive Chinese-made steel products threw the global market into turmoil after 2015, when the country's output resulted in a severe glut. The excess production by Chinese steelmakers caused the so-called tetsubie, a steel industry decline that eventually subsided after Beijing took the initiative in eliminating surplus capacities.

China's current soaring inventories have cut domestic trading prices of hot-rolled coils of steel sheets used to produce home appliances and cars to around 3,500 yuan per ton, down from more than 3,800 yuan in mid-January.

In East Asia's export market, hot-rolled coil prices -- including cost and freight -- stand just over $500 per ton, falling nearly 1% from a month earlier in sluggish trading amid China's industrial slowdown.

Steelmakers worldwide tightened the market in 2019 to address price declines caused by stalled demand growth in Southeast Asia and elsewhere sparked by the U.S.-China trade frictions.

Another tetsubie is feared if China's stockpiles lead to abundant exports by the steelmakers, further sapping demand globally from manufacturers and construction companies.

"When steel products in stock start moving out, those that cannot be consumed domestically will exert downward pressure on the market if they are exported," said Katsuhisa Miyamoto, executive vice president of Nippon Steel.