New shipbuilding orders in the first half declined 57% to the lowest levels seen this century, according to data from Clarkson Research Services. Just 269 ships – equivalent to 5.75m cgt – were contracted in the first six months around the world, putting many yards in jeopardy of running out of business in the coming year.

Commenting on the plight shipyards face today, Dag Kilen, head of research at Fearnleys, said owners were holding back from putting pen to paper for new tonnage over the uncertain green regulatory framework ahead.

“Covid is part of the explanation, but it was a weakening trend there already before Covid which stems from uncertainty on what to do about propulsion and coming stricter emission regulations,” Kilen said.

LNG dual-fuel is an alternative today but Kilen said it remained too expensive for many, while alternatives like ammonia and hydrogen are  still under development.

“There is a wait-and-see approach among many owners,” Kilen said.

A report from Danish Ship Finance published in May suggested there will be more than 200 yard closures in the coming months and years.

Half of active yards have not seen any new orders since 2018 and orderbooks are now petering out for many shipbuilders.

Global yard capacity totals 56m cgt, divided between 281 yards. Since 2013, more than 240 yards with a combined capacity of 16m cgt have left the industry. However, much more capacity needs to close, the report suggests.

Danish Ship Finance has identified a group of 64 yards that represent half of global yard capacity but more than 75% of the current orderbook. The researchers expect these so-called first-tier yards will form the core of the future yard landscape.

Dr Martin Stopford, the president of Clarkson Research and the world’s most famous maritime economist, published a white paper earlier this year with his forecasts for the shipping markets through to 2050.

Stopford’s worst-case scenario for shipbuilding sees a severe recession for shipyards in the early 2020s, due to the deep coronavirus-driven downturn in the world economy. This dark prediction sees sea trade declining by 17% by 2024.

Shipbuilding demand does not recover until 2025, according to Stopford’s worst-case scenario, reaching a peak that year of 160m dwt, roughly the same as in 2011. This peak is due to replacement of the ships delivered in the 2009-2012 boom and the increased deadweight capacity of ships needed by the fleet operating at much slower speeds of 10 knots. In this scenario, if past recessions are any guide, Stopford suggested counter-cyclical ordering by investors or governments will likely play an important part in determining how the early years of this scenario develop for shipyards and owners. Technology driven orders might motivate this sort of activity, Stopford predicted.

“In recent decades shipbuilders and shipping companies needed few research, development and design resources. They could rely on ‘last done’ when tendering. But that is no longer the case. In the coming decade shipyards and their suppliers must be able to offer designs involving new technology,” Stopford wrote in his widely circulated white paper.

As well as the dwindling orderbook, shipbuilders are having to contend with owners deferring projects more and more.

“It seems there has been a lot of slippage so far in 2020, we’re half way through the year meaning we’d expect to have over half of the 2020 vessels live, but our data (see chart below) shows that there is a great deal still on order which is likely to slip further into 2021,” Sam Tucker from VesselsValue told Splash today. 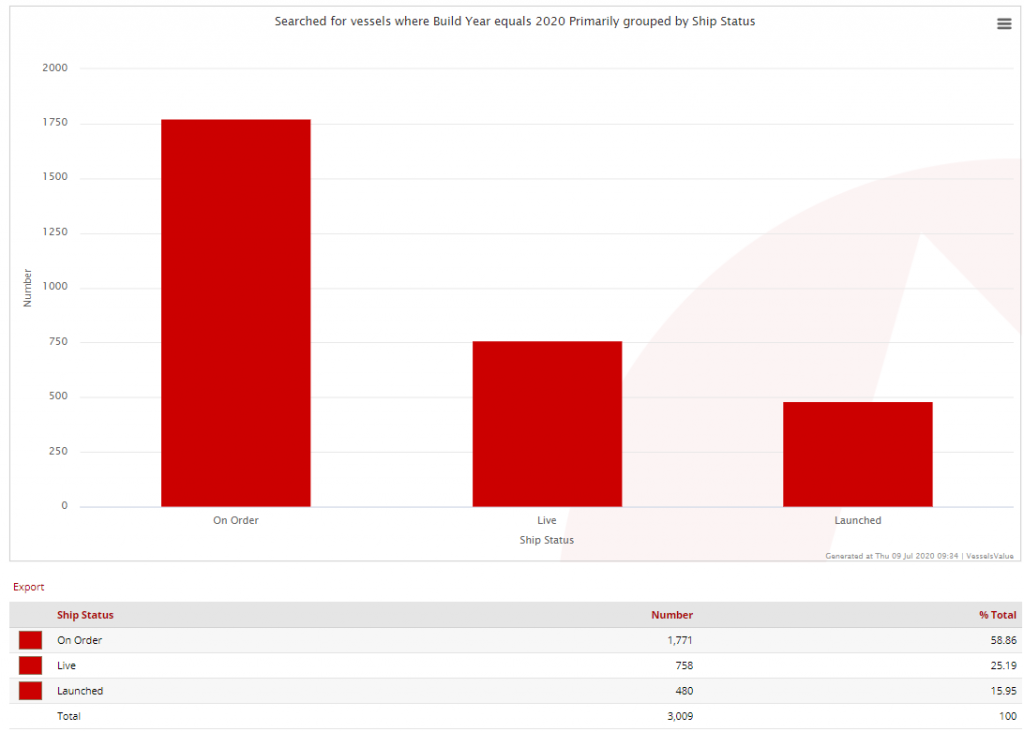