President Donald Trump said the U.S. will increase tariffs on China in case the first step of a broader agreement isn’t reached.

China is “dying” to make a trade deal with the U.S., Trump said, adding that he’d only sign it if it’s good for American companies and workers. Still, “we’re close -- a significant phase one deal could happen, could happen soon.”

Trump and Chinese President Xi Jinping had planned to sign “phase one” of the deal at an international conference this month in Chile that was canceled because of social unrest in that country.

Shanghai stocks opened lower and the yuan was weaker against the dollar on Wednesday. Other Asian markets also declined. Hong Kong’s benchmark declined 2% as the city faced heightened tensions.

A new site for the signing hasn’t been announced. U.S. locations for the meeting that had been proposed by the White House have been ruled out, according to a person familiar with the matter. Locations in Asia and Europe are now being considered instead, the person said, asking not to be identified because the discussions aren’t public.

Trump reiterated complaints about China’s ascendance in the global economy. “Nobody’s cheated better than China,” he said. “The theft of American jobs and American wealth is over.”

U.S. stocks have rallied to records in recent days partly on optimism that tensions are cooling in an 18-month dispute involving tariffs on some $500 billion in trade between the world’s two largest economies. The S&P 500 Index was up about 0.3% as Trump delivered his remarks. 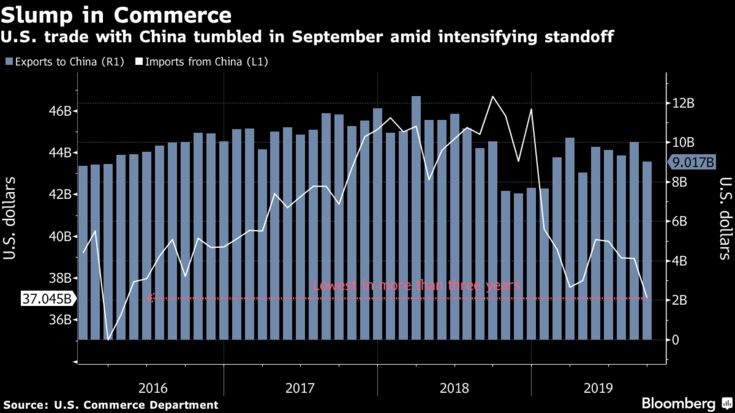 The economic stakes of a prolonged trade war are rising for both countries.

China’s exports and imports continued to contract in October, though slightly less than forecast by economists. The nation’s trade surplus with the U.S. widened in the month to $26.4 billion -- heading in the opposite direction from the narrowing that Trump has called for to balance the countries’ trading relationship.