We asked 6 experts to parse the China trade agreement. Here’s what the U.S. won (and lost)

Markets finally got this week the signed phase 1 U.S.-China trade deal they had waited for. "The market impact is largely the rally we've seen over the past three months," wrote Greg McBride, chief financial analyst at Bankrate.com, in a note to Fortune. It's a "cloud of uncertainty" cleared from the U.S. and global economy.

Experts in trade business and law who reviewed the agreement—which was only made available after the signing— tell Fortune the first phase is an important step. But much remains nebulous, particularly for enforceable tangible gains.

The document is "a very, very good start," said Usha C. V. Haley, W. Frank Barton distinguished chair in international business, professor of management, and director of the Center for International Business Advancement at Wichita State University. "It reduces uncertainty and allows companies to breathe a sigh of relief."

"The Chinese don't get everything they want," adds Juscelino Colares, Schott-van den Eynden professor of business law, School of Law associate dean for global legal studies, and professor in the department of political science at the College of Arts and Sciences, Case Western Reserve University. "We don't get everything we want. But we get negotiations without the threat of continued escalation."

The first focus in the agreement is on intellectual property disputes—patent infringement, forced technology transfers by U.S. companies entering joint ventures, and counterfeit goods. "I was surprised to see it was front-loaded with all these principles," said Nicole Lamb-Hale, managing director of business intelligence and investigations at risk management firm Kroll and a former assistant commerce secretary in international trade administration during the Obama administration. "There are a lot of aspirational goals and statements."

Chinese officials have acquiesced to similar joint understandings in the past. But the addition of "hard law language"—prescriptive and directive verbs like "shall"—and "a reasonably rigorous effort at a credible dispute mechanism" are new and notable, said Raj Bhala, distinguished professor, University of Kansas Law School and senior advisor, Dentons.

Bhala called the trade agreement the "broadest and deepest" between the two countries. Both sides also largely checked English and Chinese versions of the text for "exactly the same language" and meanings, called scrubbing. "During the legal scrubbing process is where disputes can often arise," Bhala said, pointing to negotiations during the Spring of 2019 when China "deleted 30 pages."

There is also $200 billion over 2017 export levels of planned sales of agricultural and industrial goods between 2020 and 2021. The table below, from the agreement, shows the numbers. 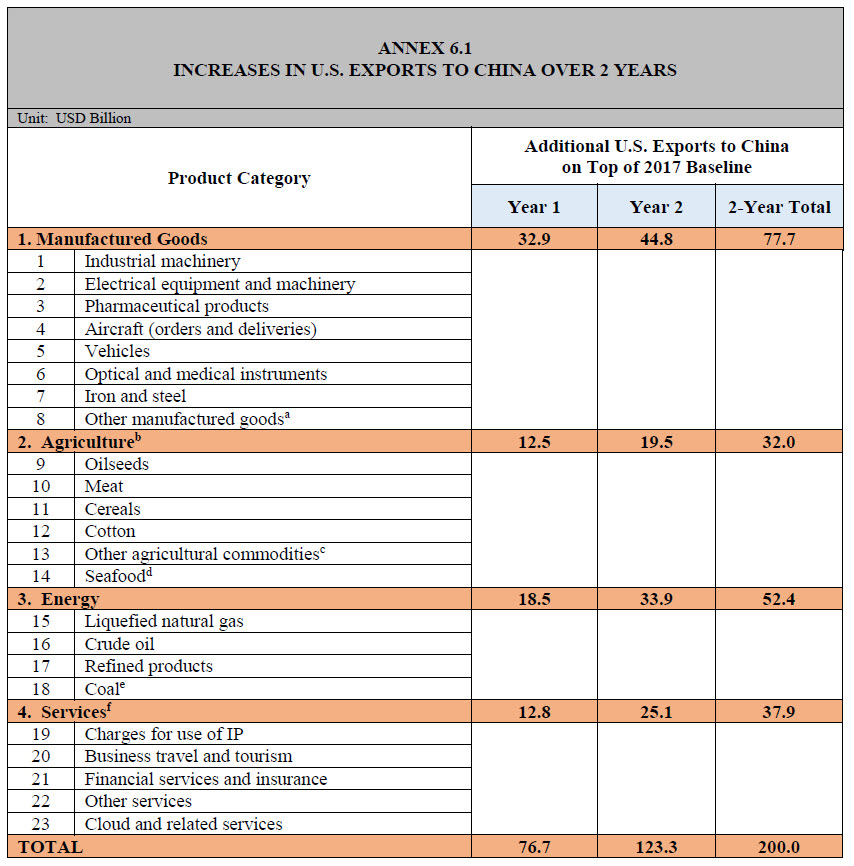 A large concern may be the "erosion of a norm," Lamb-Hale said. "The U.S. doesn't ordinarily make agreements with market distortions [like mandated import levels]." Future negotiations with other countries may suffer as trade partners demand such fixed guarantees rather than trade driven by market needs.

"At some point President Trump will no longer be in office," Lamb-Hale said. "At that point, what will we be left with as we erode these bedrock norms? We are losing our moral authority to say, 'You should let the market do this.'"

"That would be a tremendous increase over the 2017 baseline for China to absorb," Bhala said. It's unclear whether China really needs, or would be willing to, consume more. Other options include cutting imports from other countries, or, as most countries do, keeping reserves of products like food and oil.

Whatever the case, multiple experts were concerned that fixed purchase targets could raise multiple risks. One is trade-related lawsuits. If China reduces imports from other trading partners to match the goals, that could lead to legal action by other countries against China and the U.S. under World Trade Organization rules.

A second risk is excess market concentration for U.S. producers. For example, total agricultural export value to all other nations in 2017 was $138.2 billion, according to Department of Agriculture numbers. China took $19.6 billion, or 14.2%. Under the agreement, China is supposed to buy $32.1 billion this year and $39.1 billion next.

"Basically it would divert almost the entire soybean crop we export to everybody to China," said John Scannapieco, chair of the global business team at law firm Baker Donelson. "We're shrinking our markets. We should be helping farmers to diversify."

As the trade was has shown, without sufficient diversification, producers risk of a sudden reduction of purchases, for whatever reason, which can be disastrous.

The agreement ignores some other long-standing complaints that U.S. businesses have had. "The huge elements missing from the negotiating rooms are subsidies and structural changes [like state-owned businesses]," Haley said. "The Chinese refuse to take them on."

And while the agreement seems to address complaints that Chinese companies steal intellectual property from U.S. firms, often with the knowledge of the Chinese government, the experts we spoke to said it has big loopholes that might allow the practices to continue.

The agreement also doesn't mention tariff levels. Although some of the more recent tariffs will be cut, "tariffs remain on the bulk of $360 billion of Chinese goods" imported annually, Haley said. And there are no included provisions for future negotiations.

Finally, if there is a dispute on any point in the agreement, the experts Fortune talked to didn't see that there was much either nation could do to enforce the deal. Should one side bring a complaint, the mechanism to resolve the problem involves a back-and-forth series of negotiations that either result in a solution or, in the worst case, sees the complaining country drop out of the agreement.